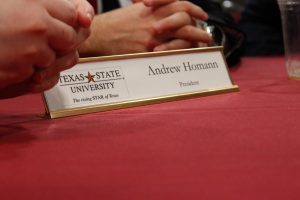 TXST Has the Last Laugh

Article by Tommy Moriarty For some, getting up in front of a crowd to speak can be daunting, especially if the crowd starts laughing at you. But others, specifically those dabbling in stand up comedy, are drawn to the crowd and that laughter is the ultimate goal. At Texas State, these comics have found each […]