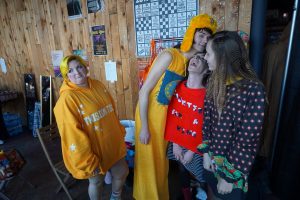 An Essential Grocery Store Worker Shares Their Experience, Hopes And Fears During The COVID-19 Pandemic

Jennifer S. works at two separate H.E.B. stores in central and West Texas. She was overwhelmed with the changes at both her university and her store during the mid-way point of the month of March. She was working at the start of the panic buying that impacted the H.E.B. store in San Angelo. This audio […]