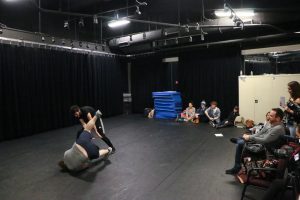 By Amanda Lattimer According to members of the San Marcos Art Market, one of the biggest reasons it keeps growing is because of the rapid population growth of San Marcos. Ronnie Borden, one of the founders of the art market, explains that every year he sees new engagement and customers at the Art Market. “There […]

Grand Central Café: Behind the scenes of the Texas Chainsaw Massacre