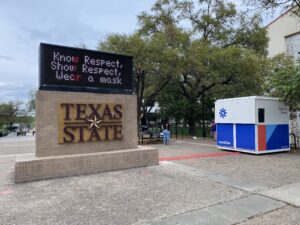 Quarantine Pets: Where are they now?

By Emilee Kownacki SAN MARCOS–After a splurge of pet adoptions took place over the recent quarantine, many of these newly-homed animals are being returned to shelters, causing an overflow of pets and a need for new loving families to take in these furry friends. Those who tried to fill the void with canine companions came […]

Kaitlyn Anderson, a third-year student at Texas State, said she worries for what comes after college. As a digital and online media major, she feels that she will be most successful moving to a city. However, recent inflation has affected cities the most. According to KXAN, “The consumer price index, which tracks changes in consumer […]