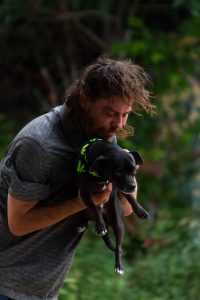 A journey through Fear Factory: The Body Farm…

Article by Rikki Yanez “You have not only the scary element of being in the woods, but you have the scary people too,” says Misty Pestor, coworker of owner Michael Grover, when asked her thoughts about the property they decided to choose for the haunted attraction. On the opening night,October 20, Fear Factory Presents: The […]

The San Marcos Parks and Recreation Department hosted an evening of tricks and treats, pumpkins and sweets. The annual Farmer Fred’s Harvest Fall Carnival was held on Friday, October 26 from 6-9 PM at City Park. This carnival featured free games, prizes, candy, a children’s costume contest and much more, this event was fun for […]

Workers in the Restaurant Industry Face Uncertainty due to COVID-19

By Rebecca Rodriguez (rar270@txstate.edu) In March of 2020, the United States began to feel the impact of a deadly virus. There were shutdowns all across the country which resulted in massive layoffs. The restaurant industry in particular took a devastating hit.  Those who were able to keep their jobs did not return to work in good spirits. There was so much […]