San Marcos Texas is home to the San Marcos River, Texas State University, the best damn Exonn breakfast tacos you’ll ever have and the Square. The town itself is filled with twenty something year olds trying to get their life together, which is clearly evident if you’re out driving around the square between 10pm and 2am on any night of the week.
Much like Lubbock, College station and Denton, San Marcos is a college town. According to the 2016 United States Census Bureau, the San Marcos Population was

61,890 and 38,849 of those people were Texas State students. This means that over half of the town is made up of broke college kids. In other words, Four Loko and Natural Light sales are especially high in this town. As every college town does, San Marcos is has its very own strip of bars. Each tells a different story with different people from all over who come together to forget yesterday’s Midterm and tomorrows Bio-Chem Exam.

Enough with the facts and figures, let’s get to why you’re really reading this; for the all inclusive guide to beer, babes and bars on the iconic Square. According to the San Marcos Visitor Bureau, there are 27 bars on the square. I set off on an adventure to discover what bars were for what. I was pleasantly surprised to find that there are pool halls, country bars, night clubs, gay bars and patio bars all within this three mile radius. The variety of bars is one of the reasons that the square is such a hit. As I walked down the crowded strip I watched Ashley from Apple Sigma Pie latch on frat daddy Brad as the aroma of cheap beer and bad decisions invaded my nose. Amongst the midnight chaos I found Senior Education Major Katelyn Hodges. She said that “The square is perfect, because there is a place for all walks of life. It’s a melting pot of people, bars, music, food and about a thousand songs you can karaoke to with a beer bottle as your microphone”. She then disappeared into the distance with her friends, but their off tune singing of Blink 182’s “All The Small Things” echoed through the streets. Of all the bars I went to it seemed like the most popular were Mayloos, Green Parrot, Nephews, Vodka Street, the Marc, RoofTop and Chimys. 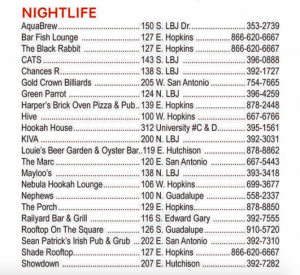 As I continued to venture down the cold strip categorizing my favorite bars I came across Senior JJ Arechiga, he said “The square is a condensed 6th street with better drink prices and no cops on horses. Its full of life, cheap drinks and reeks of bad decisions and nights we can’t remember with people we will never forget”. He was not wrong, the prices are fairly reasonable. Compared to Northgate and 6th street, the Square is the jackpot for cheap drinks. You can get a beer for around three dollars and a cocktail from $5-$8. Many bars also feature “You Call It” specials. Depending on the day of the week and the bar you’re at, you can drink for next to nothing. Check the bars social media and websites for happy hour specials and week night deals. The Square is crowded every Tuesdays, Thursdays, Fridays and Saturdays. Mondays and Wednesdays are relatively calm, this is perfect if you’re wanting to go out, but not be in a big crowd.

It’s not just San Marcos residents that rave about the square and all its wonder, it’s people from all over, who come to forget whatever it is that they are trying not to feel. As my night came to a close, I encountered a 23 year old experienced bar hopper, Stetson Ralmuto. He said “ I’ve been to bars and strips all over Texas, but the Square is by far my favorite. When you’re on the square you are surrounded by good beer, good company and good times. From College Station to Fort Worth to Lubbock, there’s nothing like the square.” I couldn’t help but notice his grin from ear to ear as he watched the drunks stumble out of the bars at 2am while trying to find someone to take home so that they wouldn’t have to sleep alone again.

The Reopening of the Texas Bars in 2020