In the wake of yet another mass shooting, Americans are struggling to find a solution to the gun violence epidemic. The Rancho Tehama Elementary School shooting marked November’s third mass shooting and the 11th this year, making 2017 by far the most deadly year of mass shootings in the history of the United States.

According to a new dataset from the left-leaning Mother Jones, mass shootings are defined as an incident where a shooter (or pair of shooters) kill at least four people in a public area. Mother Jones excluded data primarily related to gang activity, armed robberies or killings that took place inside private residences. 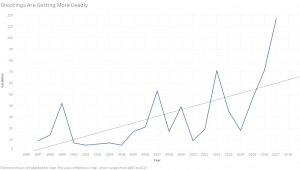 The data shows that shootings have been getting increasingly more deadly over time, especially in the past 20 years. America has witnessed at least five fatalities due to mass shootings each year and this year the count is up to 117.

The peaks in the graph correspond with many national-attention garnering events like the Columbine school shooting in 1999, Virginia Tech massacre in 2007, the Fort Hood Military Base shooting in 2009, The Aurora movie theater shooting and Sandy Hook massacre in 2012, the Orlando nightclub shooting of 2016 and Las Vegas Strip shooting earlier this year.

At first it may seem insignificant to point out that there is still one month left in 2017, but if December mirrors November, America would still have three mass shootings and 35 deaths to cope with.

The graph above tells a story of a nation struggling with a mental health crisis. Nearly three-quarters of all mass shootings in the United States have been perpetrated by individuals with confirmed mental illnesses. The amount of fatalities inflicted by people with mental illnesses compared to people without is nearly identical to the ratio of mass shootings between the two groups. People with these illness are more likely to commit indiscriminate mass shootings with the goal of killing as many people as possible while people without prior signs of mental health issues are more likely to commit these atrocities as a result of conflicts or circumstances in their personal life. 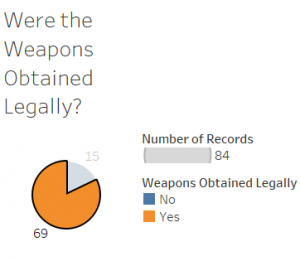 Naturally, lawmakers and the public begin to examine current gun laws after each mass shooting. In 82% of shootings the weapons used were legally obtained. Federal law provides states with wide authority to decide how restrictive gun laws are in their own state. California is by far the most restrictive state with 106 gun laws while Alaska, Idaho and Montana have only four gun laws each. Despite the regulations, California was home to the seventh most deadly shooting in America in which a man walked into a McDonalds and murdered 22 people in San Ysidro in 1984. Americans are 30 times more likely to die from gun violence than residents of most European countries, although an investigation by NPR shows that the U.S. ranks behind 30 other countries in gun violence per 100,000 people.

From when the global pandemic began to today, plenty of changes took place, and lots of businesses suffered. Without anyone to volunteer, animal shelters experienced a dramatic change that would affect not only the workers but the animals as well. At the start of the pandemic, animal shelters actually noticed a surge in adoption. The […]