In South Carolina, there were reports of clowns trying to lure small children and women into the woods and there have been reports of threatening clowns in half a dozen other states, including North Carolina, Georgia and Kentucky, according to media reports. It’s become such a popular subject, that people are “hunting” these clowns and posting it onto YouTube or other video outlets. Not all of these clowns are harmful, but the spate of creepy clowns has some people carrying weapons, such as guns or knives, to use in self-defense. Recently, the Texas State University community has had threats on social media and some students have reported spotting clowns nearby. 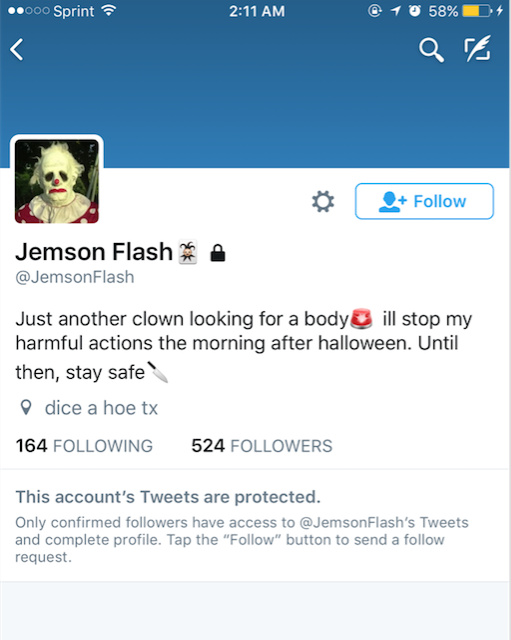 There were two major incidents that happened near two apartment complexes in San Marcos.

The first one occurred at Bobcat Village Apartments where a clown described as 6’2″ tall, black and white face paint with a matching jumpsuit and wig was spotted. It was reported a clown grabbed a woman in the parking lot of Bobcat Village, but she was able to flee the clown’s clutches.

The second occurrence happened near Ella Lofts, where witnesses reported a clown jumping out at people with a chainsaw late at night near the campus. Many students have voiced their opinions about their safety near their apartment complexes, where these clowns have shown up in the past. Aly Holwerda, a junior psychology major at Texas State, said she was worried after a clown assaulted a woman at Bobcat Village.

“I didn’t want to leave my house after hearing about the news at Bobcat Village,” Holwerda said.” I made sure to deadbolt my doors and not leave my house at night for a few weeks.”

Since safety is a major concern with most college campuses, Texas State made sure to send mass emails regarding these clown threats and attacks. Along with these emails, campus police have been making their rounds late at night checking parking lots and complexes nearby. Sarah Coleman, junior art and design major at Texas State, gave insight as to what she would do if a clown were to attack her.

“My dad was a police officer so he would always give me advice if anyone were to approach me and potentially attack me,” Coleman said. “I always carry mace and a small pocket knife just in case someone, not only a clown, could hurt me.”

This past weekend, Texas State tailgate students encountered some students who had decorated their truck with clown body parts and parked it in the middle of the tailgate grounds. Michael Edward, Junior and business major at Texas State, described the reasoning behind the truck decorations.

“My buddies and I thought it would send a message that we don’t mess around with these scary clowns who could potentially hurt the students here,” Edward said. “We are not doing anything wrong, but sending this message shows that we are serious when it comes to threats in the community.”

While the threats are not considered credible, law enforcement is seriously investigating the threats and, in some cases, raising security levels. Texas State Police have warned students to not walk late at night alone or if encountered by a clown to not provoke it but run. Students who see something suspicious are encouraged to call the university police department. For emergencies, call 911. Students who want assistance traveling on campus at night can call the Bobcat Bobbies.

Covid-19 effects on the beauty industry

Beauty is one of the many things that are timeless. Many people make sure to have a budget for their beauty needs such as makeovers, makeup, haircuts, facials, manicures and pedicures etc. For someone like myself, these could be weekly needs but for others, maybe every two weeks or whenever they can find the time […]

Upcoming graduating college seniors looking for employment will be met with a different work landscape from years prior due to the pandemic. Graduating Texas State University students majoring in psychology, one of the most popular college majors to be affected by COVID-19, are adjusting to the changes of employment as internship opportunities become remote and […]