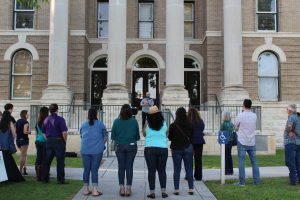 Buzz in The Hills shows off its Local Buzz

Buzz in the Hills, a bee keeping consultation based in San Marcos, Texas, will begin selling beeswax based products at Cornucopia, San Marcos starting December 2. The move from the hive to the store has been a hectic journey for Buzz in the Hills founders Cody Hughes and Lexi Nutters, who’ve begun backyard beekeeping in […]