SAN MARCOS– Texas State University is set to open a new engineering and sciences building in 2018 to accommodate the growth in the school of engineering.

June 18, 2015, House Bill 100 became a law, allowing public universities across Texas to sell tuition revenue bonds to raise money to build. Only a few members of the House opposed the bill primarily because they did not want the state or universities to take on debt. The state had not passed any similar bills to let universities sell bonds in a decade. House Bill 100 is helping finance 64 projects across the state. Texas public institutions of higher education split $3.1 billion worth of construction bonds. Texas State University got a green light to raise $111.6 million from bonds; $63 million to use towards a new Engineering and Sciences building and $48.6 million for a new Health Professions and Nursing building at the Round Rock campus.

According to the Texas Tribune, state universities have been waiting years to be granted bonds to pay for new labs, centers and classrooms on their campuses. In 2013, state universities came close to securing billions of dollars, but lost sight of it in the session’s closing moments. Texas State was forced to delay two projects said the university system’s associate vice chancellor for governmental relations, Mike Wintemute.

The school of engineering at Texas State has grown from 62 students a decade ago to over 1000 students this year. With continued growth, the Roy F. Mitte building does not have the room to accommodate the needs of faculty and students.

The new engineering and sciences building will not only be for Texas State University students. The building will feature a maker’s space. Stan McClellan, director of the school of engineering, says it is Texas State’s version of a tech shop approach. “The maker’s space is open to anybody. There will be a huge area full of equipment and different kinds of technologies that they can come build stuff with. There’s a room full of 3D printers, a room full of CNC machines and if they want to do some electronics they can do some electronics,” said McClellan. People in the community who do not go to Texas State will be able to use the maker’s space for a small fee. 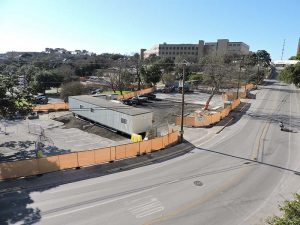 The new engineering and sciences building is projected to open in the summer of 2018.