Texas State’s Student Health Center injunction with the Counseling Center and Hays Caldwell Women’s Center took back the night with a rally and spoken word event to create safe and respectful communities and end sexual assault, domestic violence, dating violence, and all other forms of sexual violence.

Before the event Student Health Center health educator, Men Against Violence advisor and coordinator of the event Kelsey Banton said she wanted students to create respectful places on campus and know that there are people on campus committed to creating change. 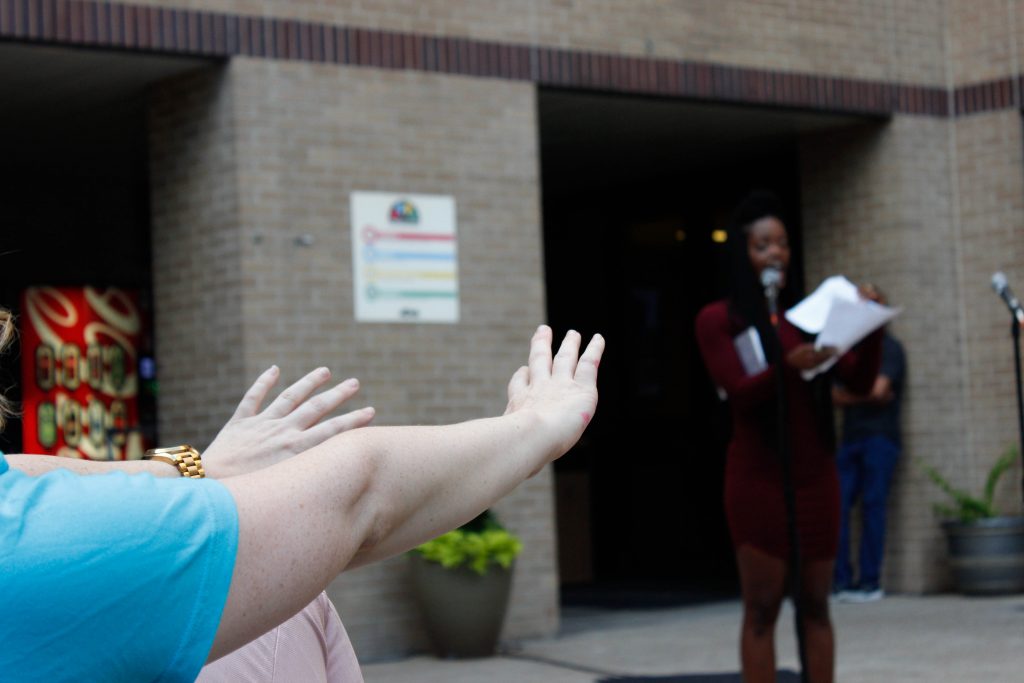 About 20 students marched from Old Main to the LBJ Amphitheatre shouting chants such as: 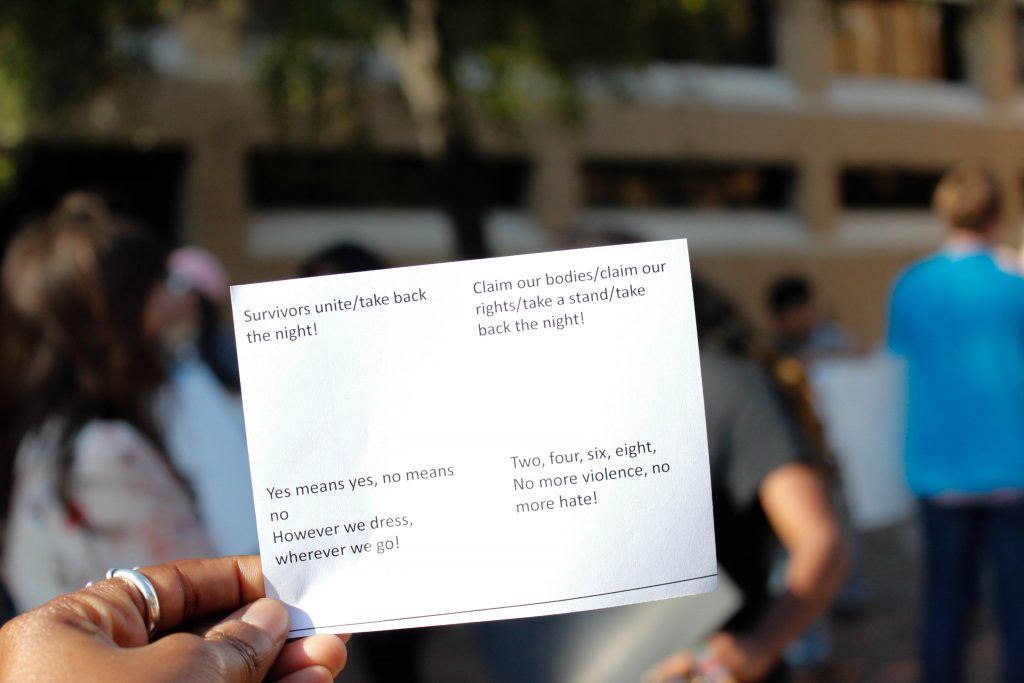 The spoken word was hosted by Texas State Alumna and three time slam champion Ebony Stewart. Stewart said. “We are here to recharge, to reproduce ourselves, recreate, take back whats ours, and I want you all to be lifted.” 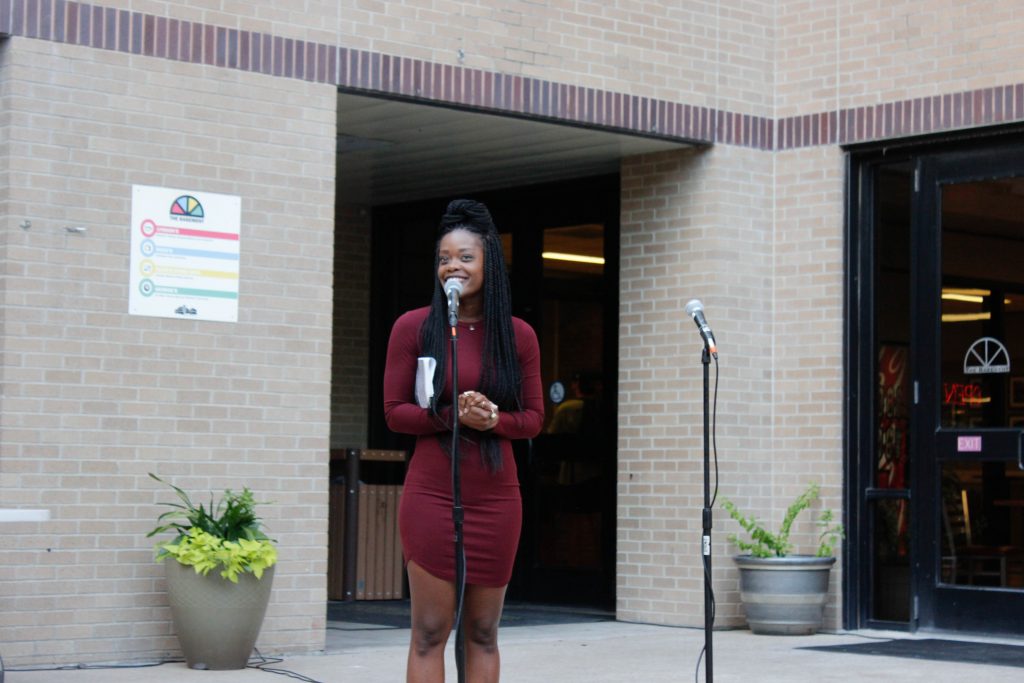 Stewart performed three poems, one including Joy, a response to a woman who trolled her under her comments for consistently bringing up race and rape in her poetry.

Other speakers included representatives from the Hays Caldwell Women’s Center, Not On My Campus and other Texas State students brave enough to share their story.

Overall President of Men Against Violence Nick Rambeau was satisfied with the event, “I hope people walk away feeling more independently confident to have those conversations about dating violence and sexual assault with their friends so that we can help bring these issues to light,” Rambeau said. 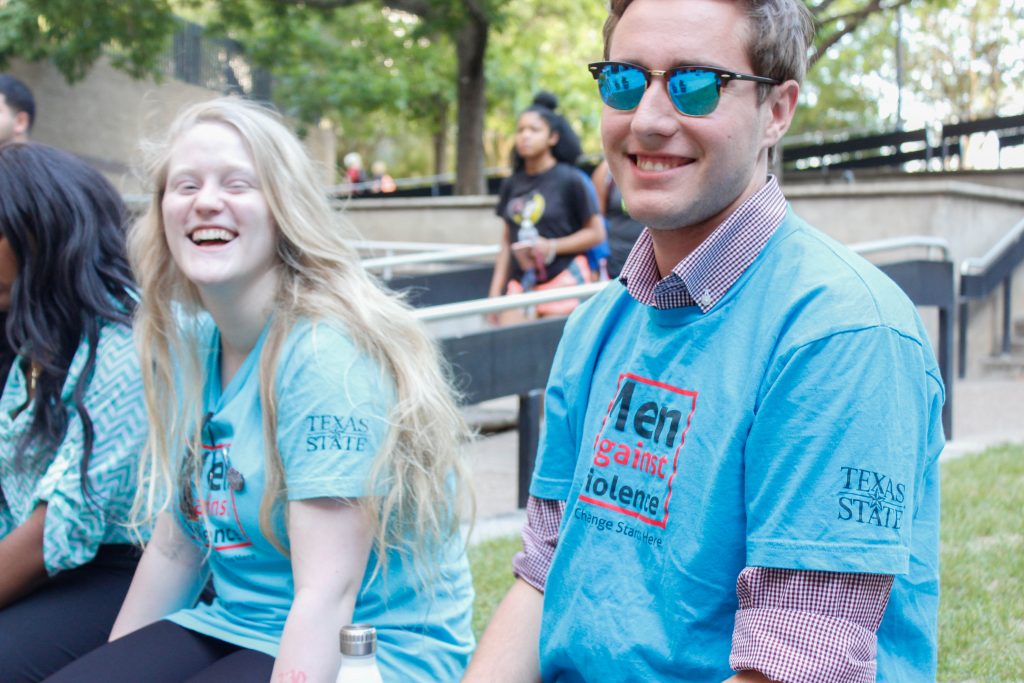 Currently 1 in every 5 women will experience some form of sexual assault while in college. It is important for students, faculty and staff to all play their part to end sexual violence on campus. This event was promoted to shatter the silence that exists around sexual violence.

I sat down with Mackenzie Akin to chat about the local music scene in San Marcos and how it has changed in a post- pandemic world.

Is Golf Growing During the Pandemic?

With the panic that came with the spreading of the virus in 2020, many different small businesses were affected and weren’t getting enough business to stay open. Golf companies found a positive during a time of negatives in 2020. Golf’s popularity surged because it’s one of the few outdoor sports in which players can more […]

The influence of violent video games

By Dylan Matney Video games have always sparked argument when it comes to their impact on the mental health of the consumer. With the mass shooting numbers rising well above other countries the United States has put a lot of blame on video games for the rising violence. The United States isn’t the only country […]